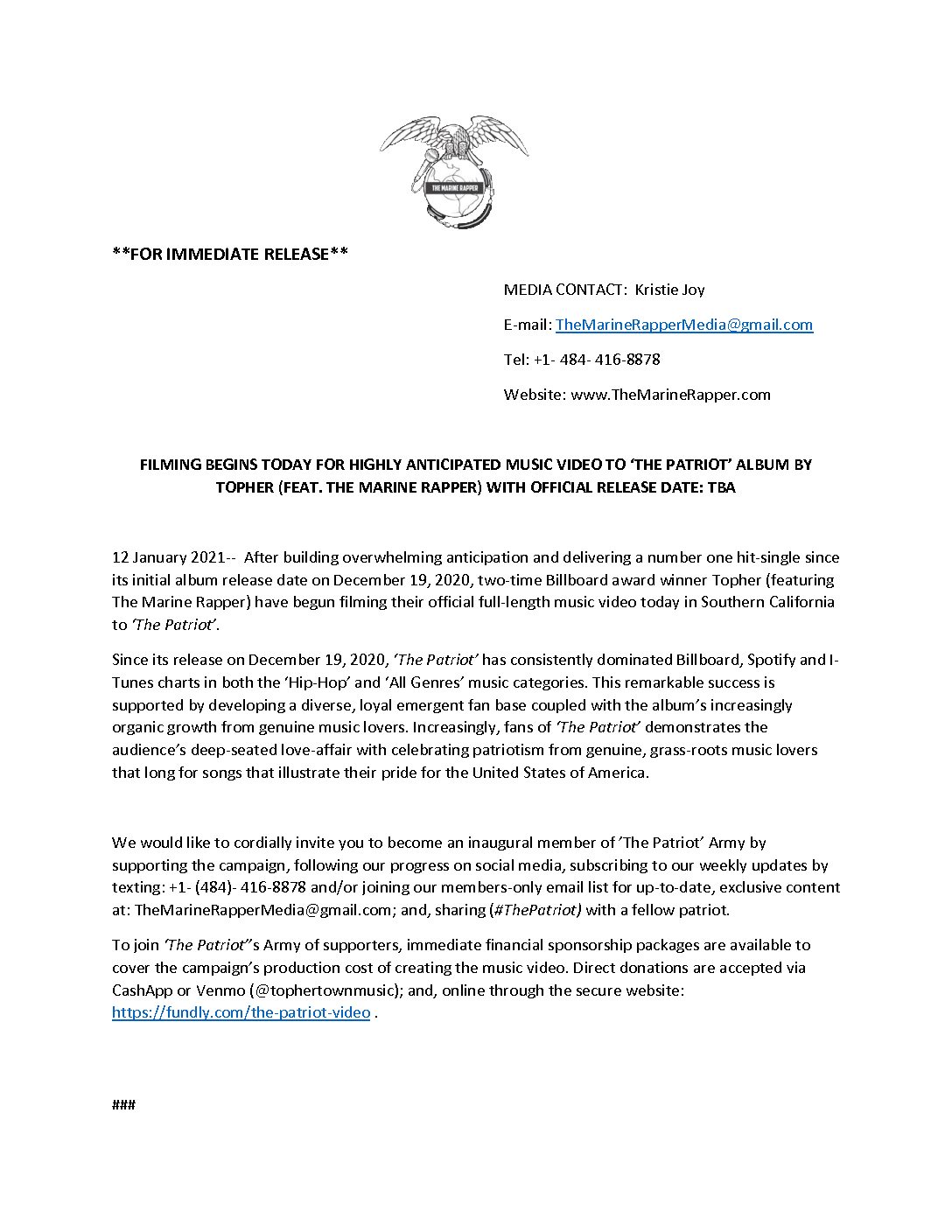 After building overwhelming anticipation and delivering a number one hit-single since its initial album release date on December 19, 2020, two-time Billboard award winner Topher (featuring The Marine Rapper) have begun filming their official full-length music video today in Southern California to ‘The Patriot’. This Billboard #1 album is available to preview at https://music.apple.com/us/album/the-patriot-feat-the-marine-rapper-single/1545993191 and can be purchased on multiple hosting platforms online, including I-Tunes, Amazon and Spotify (removed from Spotify seemingly indefinitely on 01/06/2021).

Since its release on December 19, 2020, ‘The Patriot’ has consistently dominated Billboard, Spotify, and I-Tunes charts in both the ‘Hip-Hop’ and ‘All Genres’ music categories. This remarkable success is supported by developing a diverse, loyal emergent fan base coupled with the album’s increasingly organic growth from genuine music lovers. Increasingly, fans of ‘The Patriot’ demonstrates the audience’s deep-seated love-affair by celebrating patriotism from genuine, grass-roots music lovers that long for songs that illustrate their pride for the United States of America.
We would like to cordially invite you to become an inaugural member of ’The Patriot’ Army by supporting the campaign, following our progress on social media, subscribing to our weekly updates by texting: +1- (484)- 416-8878 and/or joining our members-only email list for up-to-date, exclusive content at: [email protected]; and, sharing (#ThePatriot) with a fellow patriot. Website: www.TheMarineRapper.com To join ‘The Patriot’’s Army of supporters, immediate financial sponsorship packages are available to cover the campaign’s production cost of creating the music video. Direct donations are accepted via CashApp or Venmo (@tophertownmusic); and, online through the secure website: https://fundly.com/the-patriot-video .

I’ve always been a fan of Irish music. This is an interesting mix. 🙂

I absolutely LOVE this song and will share where I can! Keep them coming!

WOW! That was awesome. Love it.