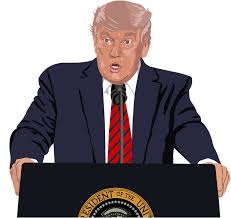 This week there was a tragic death of a 46-year-old man in Minneapolis, Mn. It happened when a policeman arrested the man, who was accused of forgery, a non-violent crime. Immediately, based upon the live video of the incident, the event became racially charged since the accused man was African American, and the police officer was Caucasian. This incident led to violence and unrest including riots and looting in Minneapolis and elsewhere.

In response to this incident, President Trump made many comments. He offered condolences to the man’s family, he also asked the Department of Justice and the Federal Bureau of Investigation to investigate the matter. In response to the rioting and looting, the President implored people to not take part in such actions, his comment was “when the looting starts, the shooting starts”.

Apparently, this statement was first recorded as being uttered by former Miami police chief Walter Headley in 1967, during a previous episode of unrest in that city. At the time, and since, the statement was attributed as racist since Chief Walter Headley was considered to be a racist, and his harsh policing of minority neighborhoods led to greater unrest in 1968. Because of history, many people took President Trump’s statement as also being racist.

So now I ask you to use your intelligence formed by experience and consider whether or not the President ACTUALLY intended to utter a racist statement, OR, as the President himself stated in explaining the words he used, “frankly, it means when there’s looting people get shot. And they die. And you look at what happened last night and the night before, you see that. It’s very common.”

First, let us examine the history of 1967. That was a time of civil rights as the US Civil Rights Act had been passed in 1964. Miami was in the south, which had a “different” history than the northeast (to say the least!). Donald Trump was born in 1946, he lived in New York, and in 1967 would have been age 21/22, and attending College. So here’s my question; how many 21/22-year-old College students do you know who pay attention to current events? How many 21/22-year-old College students would you find SUPPORTING Civil Rights rather than opposing them? The suggestion that Donald Trump was aware of the statement by the Miami Police Chief is improbable, to say the least.

Politically, who would wish to say something “racially charged” within six months of an election? Conversely, an elected official within a six-month window of an election is certainly likely to encourage people to be lawful and safe, correct? Therefore based on human nature, and the nature of politics, it is absurd on the surface that the President intended any racial connotation to his statement, and much more likely that his response was a cautionary one as he has indicated.

Let’s look at the reaction to the death of this man while in police custody. Was his death wrong? I do not believe that a free-thinking person of average intelligence could come to any other conclusion than this was a wrongful death. The man had complied with Police, he was handcuffed, and he was docile. There was no need to subjugate the man to the painful “knee on the neck” submission act. This was wrong. Those responsible MUST be held to account.

How about the reaction? First in Minneapolis, then in several other cities? How does it benefit a community to loot and burn the businesses in their neighborhoods? Is there ANY possible benefit? At the very least, there would be an inconvenience and temporary absence of the business. Possibly the business may NEVER rebuild in the community. How does THAT help ANY situation? No, from a commonsense perspective, looting and burning serves no interest, serves no purpose except the personal gratification of the individual which is guilty of the looting. At minimum a narcissist, at worst a common thief and an enemy of the local community affected.

Therefore, it is reasonable to view the comments of the President considering this evaluation. He encouraged people not to participate in rioting and looting for the betterment of the community in which they live and with the goal of the safety of those participating in the riots and those just watching the situation in the same vicinity of the violence. Be safe, do not accidentally get injured or shot due to the violence. That is a positive message. It is a reasonable admonition. It is/was the right words to advise.

Why do people intentionally twist the Presidents words around to have nefarious meaning?

Why would anyone WANT to misrepresent or to diminish this President? Many people would have varying answers to this question. As for me, it is clear. The President faces reelection this year. The President is not a part of the “good old boy network”, nor an active member of “the swamp”. Instead, he swears allegiance to his oath of office, and his “special interest” is only, and uniquely, the people, the citizens, of this great nation.

In MY opinion, the press (and others) universally twist the President’s words into a meaning not intended, rather they use the meaning that those people derive of their own minds, simply because they want to defeat him in the upcoming election.

In 1971, Pete Townsend of the rock band “The Who” penned a popular song titled “Won’t get Fooled Again”. It was a very popular song back in the day, and I’m sure that it is much more likely that the President is much more aware and familiar with the song than the obscure comments of the Chief of Police in Miami in 1967. Part of the lyrics of the song go:

“The change it had to come, We knew it all along, We were liberated from the fold, that’s all”

When this nation voted for President Trump and elected him President, we knew that there needed to be a change. There needed to be a change from the politics of old, where the establishment bureaucracy and media had to lose their grip of their control of the nations politics. “The change had to come” as they sang in the song. President Trump is delivering that “change” every single day.

Guess, what? Those entrenched “swamp” creatures? The establishment of bureaucracy and media aren’t happy with the change. Thy LIKED being “in charge”, being able to control the narrative, getting the outcome that served “THEM”, NOT the American people!

Therefore, they MUST destroy President Donald Trump at every opportunity, including those opportunities they must invent and contrive themselves by twisting his words into something that bears zero resemblance to his intention. This is just “politics”, but worse, much worse, it is disingenuous and evil!

I ask you to use your intelligence to consider the intent of those critical of President Donald Trump. Consider WHY they would do so. Decide for yourself President Trump’s true meaning and intent. Do not fall for the “trick”.

One final thought. In the words of the song “Won’t get Fooled Again”, they also include the refrain: “Then I’ll get on my knees and pray, We don’t get fooled again” …

So I ask that you consider the same. When you hear misrepresentations and lies about our President, consider the source. If it is a friend or relative, remind them of the song, “Won’t get Fooled Again”, and maybe ask them to “Pray” for OUR President!