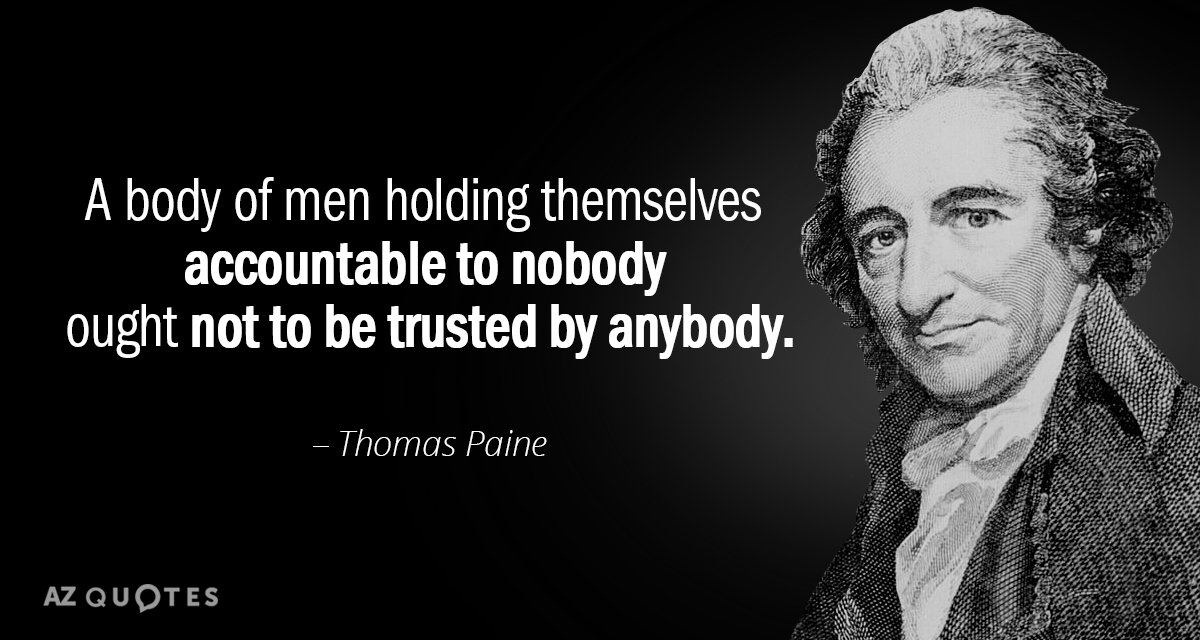 As military members, accountability was at the top of our priority list. Without accountability, the entire military would fall apart. The longer you spend in the military the less you understand the non-military world. We see the incompetence and corruption of our government (Federal, State, and Local), judges and prosecutors, schools, & our scientific community just to name a few. Even the once prestigious institutions of the FBI, CIA, NSA, DOJ, CDC, NIH, etc are now known to be corrupt. Sure, there are many good folks in these institutions but how do you know the good from the bad? You often can’t! I watch as the country I love decays into a place I no longer recognize.

The problems are easy for anyone who has been around a while to see. Why does such corruption creep in? All I can think of is a lack of accountability. It is not the only problem but I think you will agree it tops the list. Lack of accountability has been at the forefront of the recent DOJ versus concerned parents issue. The teacher’s unions and school boards do not want to be held to account by parents. Rather than being held to account, they call normal people terrorists.

Name-calling is the main tactic they use to avoid accountability. They do this because they cannot stand up to a policy debate. We are racists, bigots, privileged, misogynists, homophobes, deniers, insurrectionists and etc. That is how we end up with stupid ideas like defunding the police, white people being privileged, black people being oppressed, sanctuary cities and states, giving illegal aliens $450,000 per head if they lost their children, Afghanistan debacle, gas prices, inflation, conflicting data on Covid, no bail reform unless you are conservative or pro-America, and someone like Joe Biden as President and Kamala Harris as Vice President.

How do we claw our way back to a reasonable society? It is going to take a long time and hard work. Most of all it is going to take people with integrity and a brain to stand up. We must hold ourselves, our families, friends, and co-workers accountable. It all starts with us as individuals. I’m not talking about so-called “friends” on social media. They are mostly not friends but people you once knew or people who know someone you know or knew. It is time to start having real conversations with people in your close personal circle.

When you talk to people face to face everyone gets more out of the conversation. Phone or video call is the next best, especially with distant friends. You have to see the body language and hear the voice inflection to communicate properly. I bet that the first time “defund the police” was mentioned it was in a text format of some sort, not face to face. If it were face to face you would likely have seen the person it was said to look at the person saying it like they were an idiot. If we, the elders, do not set the example how will the young learn accountability?

When you discuss politics with people try to frame the discussion around accountability. It is a word and concept we must hammer home as the Communists do with their slogans.

For a longer video click here to go to MacAndMike.com.

Hi Timothy. Yes, for sure!

We are in a war for the hearts, minds, and souls of the precious children of America. No sane military force sends raw recruits to be trained (and mentally maimed) in the boot-camp of the bad guys. Please see “ Exodus Mandate’s Call to Dunkirk” on YouTube.


I call upon vets to volunteer to help rescue children.

Let’s start with January 6. We need to hold those responsible for the invasion of the Halls of Congress accountable. The people who actually trespassed as well as those who funded and organized it.
The insurrection sounds like a perfect place to start.

They are being held accountable. If you read into it from an objective point of view you will see it is actually over the top. People guilty of trespassing being held without bond in horrid conditions is way over the top. You have to admit Trump was held to account for all kinds of stuff he did not do. Hell, Congress even Impeached him which is the highest form of accountability a President can face. I would love to know how many FBI folks were involved. They too should be held to account. But, I suspect you know all this.… Read more »

What in the world would Hillary be in prison for? Benghanzi? The thing that has been investigated to death? How many times did she appear before Congress? Last time I counted, Hillary was investigated 9 times! How many times does she have to be proven innocent?
You want to spread out accountability to others? Let’s start with the White House.

OK, let’s go to the Clinton News Network. Do you think she did not have a part in destroying the computers and phones? Here it is on CNN. I mean if you did not catch it yesterday they just arrested a Russian working with the Clinton campaign that was at the heart of some of this crap. Here’s a link to a bunch of stories that you probably don’t hear because you are a leftist. Longtime Clinton crony takes center stage in latest Durham indictment Arrest illustrates how the Steele dossier was a political dirty trick orchestrated by Hillary Clinton… Read more »

How many people from Trump’s camp have been arrested? You don’t think that Trump is culpable for these people’s actions. Yet you blame Hillary for everything anyone has done around her. Why the difference?

The subject of the post is “Accountability”. The odd thing is you are correct. However, you miss details. Many of those arrested and sentenced were guilty of things in their past or were entrapped by the FBI. Why wasn’t the same done to the left? Were you a veteran for long enough to understand accountability? What would have happened to you if you lied to bring down one of your commanders? The Russian thing was a hoax. The Clinton campaign was behind it and that is now fact, not an accusation. It is the injustice of inequality under the law… Read more »