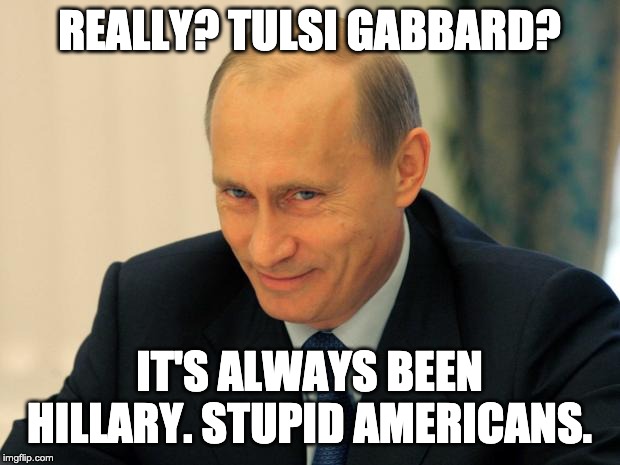 Here is a good question. Who said “If they can falsely portray me as a traitor then they can do it to anyone. You stand up against Hillary they will destroy you and discredit your message.”?

For years the left has been calling everything conservative a racist. Their other favorite go-to slur is calling everything conservative misogynistic and sexist. It did not take Democrats long to have it all backfire on them. We can all remember the multitude of big-name left elites in the Democratic Party falling into these categories, not simply by accusation but in reality.

I’m not saying that Republicans or conservatives have no sexual scandals or involvement with racism. They have plenty of them. What I am saying is if Democrats continue down this road it will eventually come back to bite them in the ass, and it has.

So what is the New Racism? Of course, it is “Russian Asset” or “Putin Puppet”! Hillary Clinton saying that Jill Stein and fellow veteran Tulsi Gabbard are Russian Assets only deepens the disdain we feel for her and by extension the Democratic Party as a whole. It is now not simply a charge levied against Republicans and conservatives but against their own. Three years of calling Trump a Russian Asset wasted millions of dollars and an unknown amount of angst for some Americans. It is all phony.

Thinking people have to wonder why Hillary hasn’t brought that charge against Bernie Sanders. Bernie is the only candidate running for President that honeymooned in the Soviet Union (now Russia for you younger folks.) If anyone is a Russian Asset it would have to be Bernie. However, even I do not believe that. He may be a Socialist and failure at simple mathematics but not a Russian Asset.

I do not align with Tulsi Gabbard or Jill Stein on their policy issues. However, Tulsi strikes me as sincere in her beliefs, unlike most politicians.

So, who said “If they can falsely portray me as a traitor then they can do it to anyone. You stand up against Hillary they will destroy you and discredit your message.”? You guessed it. Tulsi Gabbard. Send that quote without this article to your liberal friends and I bet most say, Donald Trump. Proving once again the point made in the previous post on confirmation bias.

Racist, Misogynist or Russian Asset? How about we pretend to agree we are all these things and move on to the real issues! It seems to be the only way to remove their power.

The Democrat Party is ‘circling the drain’. They owe it all to themselves and I’m not certain just WHERE it began…but something tells me it right around the time Hilary called us all Deplorables. To all my fellow vets out there, you MUST talk to your fellow vets and establish a rapport with them. You MUST prepare mental ‘bullet points’ that you can use to get your point across to them. Sadly, there are those who although they were strong enough to give of themselves to their country and its defense, have yet to shrug off the yoke of familial… Read more »

All it takes is rationality and common sense….
Imagine being so stupid that when you look at Spanky, this treasonous, traitorous,
Totally corrupt, self-serving, ignorant clown, this racists semi-literate moron, sexually
Assaulting, pathologically lying, feeble minded, morally bankrupt, constitutionally
Illiterate simpleton, this bloated nitwit with his cotton candy hair, radioactive tinted skin
And obese dishevelment and think “Now that is a guy I admire”.

Michael, you are correct. As we can see from a comment by a PJ Broun above we are not dealing with thoughtful people. A series of ad hominem adjectives do not make a rational argument. Alas, this is the last thing people resort to when they cannot argue against the President’s policies. Frankly, it is why the Democrats will lose no matter who wins their Primary. Their policies are too far left and that includes Tulsi who supported Sanders in 2016. She seems like a nice young lady but obviously in need of a sound background in math and logic,… Read more »

Jon B
Reply to  Michael Ward

So the lies, immaturity, obstruction, crimes, mysgoncy, racism, etc. make Trump the perfect President? Does the person responsible for law enforcement is suborning perjury, telling people to not cooperate with law enforcement, and obstructing any and all Investigations, not present any problems?

Hi Jon. Both you and PJ commit the fallacy of Ad Hominem. Here is a link to a YouTube video from a Yale professor (not exactly a right-leaning learning institution) on the subject. While her last example of Ad Feminam is a more recently added type of Ad Hominem (1963), see if you can figure out the type of ad hominem fallacies that are committed in PJ’s and your comments. I know this can seem like “heady stuff” but it is why the left is losing the arguments. Most of America cannot define Ad Hominem arguments but they know them… Read more »