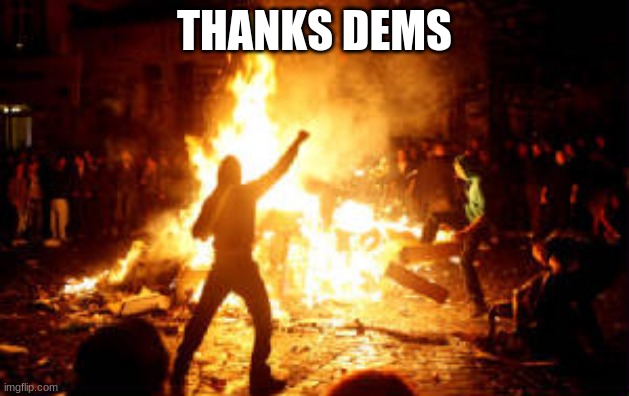 From the very bottom of my heart, I want to thank Dems. You see, veterans and Trump supporters became a bit concerned about Trump’s reelection chances after the Kung Flu hit.

Those of us with average intelligence understood how uninformed most Americans are. That is one of the consequences of living in the greatest country in the world. People get lazy. If you are a veteran that served during war and peace you understand this better than most. When shit gets real you wise up and pay attention.

Just when we were starting to reopen, the murder of George Floyd hit. Every American regardless of race or political persuasion was united. It didn’t take long for the Dems to take over. They started rioting, burning, looting, and killing. All in support of Black Lives Matter. What a joke. Dems started tearing down statues and at minimum supported or tacitly approved. They did not stop at Confederates. The fatal mistake was going after Lincoln, Teddy Rosevelt, and other good people, even abolitionists. That revealed their low IQ’s.

No matter how hard the Media tried to hide it word got out beyond FOX News and OANN fans. Normal Americans started to realize the threat from the Democrat Party. They did not simply want to make us Venezuela, bad enough, they wanted to destroy the very country that allowed them to exist in peace.

Normal Americans started to notice the problem was mainly in cities. Then they noticed those cities had been ruled by Democrats for decades. Many with black Mayors and Police Chiefs. The one exception was New York City. They had enough after Mayors Beame, Koch, and Dinkins. Giuliani, the first Republican in 24 years, had to clean up their mess.

That’s why Trump will win in a landslide. That’s why we will take back the House and likely increase Republican numbers in the Senate. Not saying Republicans are perfect by any stretch. Many suck. However, any Republican at this point beats the hell out of any Democrat in the thinking person’s mind. #WalkAway