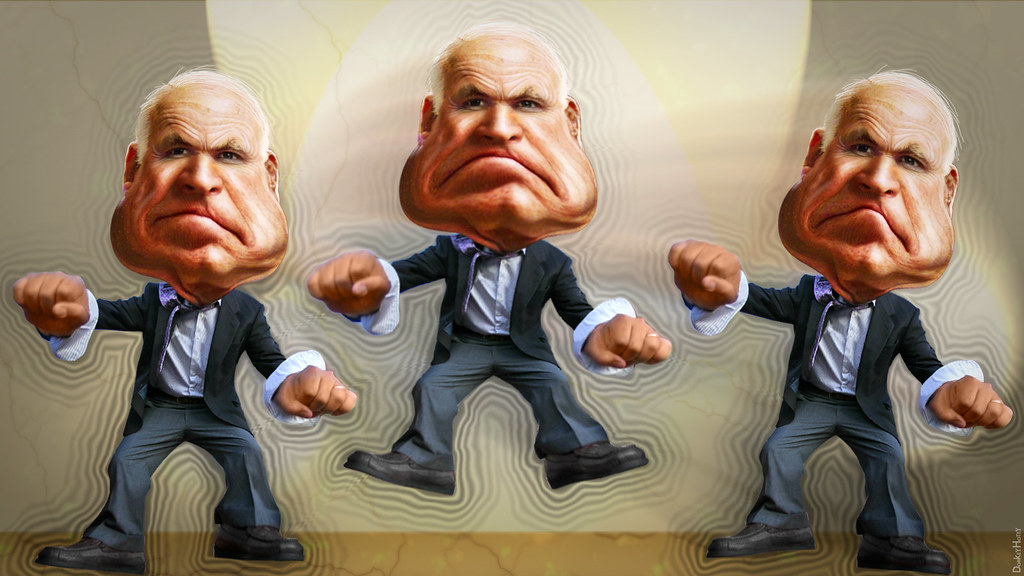 Prior to the election, I answered the McCain versus Trump question many times. See one archived post from May 2016 by clicking here. My answer is still the same today. I would never have said that McCain was not a war hero. At the same time, I had a boss in the Air Force that was also a war hero. He was the most miserable SOB I ever knew.

War hero status does not give an individual any special rights in America to be nasty. John McCain lashed out first at then-candidate Trump and his supporters retaliated.

Were we supposed to give John McCain special privilege to disparage a candidate for President and his followers because he is a war hero?

I spent just under 23 years on active duty at the 193rd Special Operations Wing under the AGR program. While I was in the unit from 1980 to 2002 we deployed for Granda, Panama, First Gulf War, Bosnia, Kosovo, and Afghanistan. In between, I spent time on missions in South and Central America.  That sounds like a lot even when I think about it. However, I was not alone. I was one of many doing things like that.

Am I or my comrades afforded any special privilege if we want to be jerks? No!  Yes, veterans and even war heroes can be jerks.

If you are a history nerd you may even recall the difficulties between Eisenhower and McArthur and others.

I give President Trump credit for remaining consistent. President Trump isn’t sugar coating it in life or death. The feud between the two of them continued until McCain’s death as evidenced by McCain’s own words. Death does not change facts.

The “despair” and “present difficulties” are only felt by those who object to the success of President Trump.

Both these men are or will be missed by the family and friends that love them.

Retired Marine and P&T Disabled Vet…couldn’t agree more. Nor should I get a free pass in life because I wear the CAR.

Well said. My prayers are with his family for their loss. Like most in this human experience I am sure that he did a lot of good and some not so good in his lifetime. He certainly loved the America , had convictions, and had the fortitude to stood by most of them. I was disappointed when I found out that Senator McCain had part in the dirty dossier and changed his commitment to yes vote on the repeal of ACA. A lot of people are now stuck in high premiums, high deductibles, and co-pays. Sad that is what will… Read more »

People should also understand that President Trump said to give the McCain family “anything they need” in relation to John McCain’s passing.

“The president told John Kelly, whatever they need they get,” Graham said in a follow-up interview on NBC.

I would not expect Trump to kiss McCain’s ass, but some basic respect should have been given. How can you give a speech on how great a bill is, but never mention John McCain’s name even though the defense bill is named for him. This shows a level of disrespect for the social norms, let alone the disrespect he constantly shows active duty as well as vets, that would be totally unacceptable if it was anyone else! What would you have said if Obama would have disrespect McCain by saying he was not a war hero since he was shot… Read more »

If you read what I wrote you would see that I said: “I would never have said that McCain was not a war hero.” I am unaware of any “national security risks” by President Trump. National security risks were obvious in the Hillary Clinton State Department. Military Lending Act is still in force from what I can gather. Predatory loans are still legal and a little education goes a long way in my humble opinion. If Congress wanted to they could outlaw them completely, but they don’t. Not the Dems or the Rep. On calling out incompetence, I’m all for… Read more »

Uses an UNSECURED phone
Michael Finn as National Security Advisor
Conducts business at Mar-A-Lago in unsecured rooms
Giving classified information to Russia
Yes, he’s allowed to do this but the info came from another country
The usual procedure is to get permission from the originator before release
Omarosa recording and removing recordings
Letting Russian Photographer into WH
Announced the CIA had been hacked
Secret meeting with Putin

Shall I go on?

“how corrupt the Intelligence Agencies,”
How corrupt are they?
What have they done wrong?

Or are you just taking the word of a proven liar on the agencies incompetence?

OK, we are getting far off the McCain thing. For all I know Trump knew John Dramesi who was a fellow POW and critic of McCain’s conduct as a POW. (Side note: I am friends with someone who knew John Dramesi (RIP) personally.) https://www.chicagoreader.com/Bleader/archives/2008/10/10/john-dramesis-unflattering-memories-of-his-fellow-pow-john-mccain I look at the former heads of the CIA, NSA, FBI, DOJ, etc. as well as some top people under them like Strzok and see corruption. I am presuming you look at them and see heroes or some positive thing. Like you, I wonder how you would feel if all these deep state folks had lined… Read more »